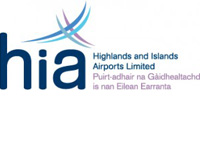 The additional flight will be operated by a B737 aircraft, carrying 132 passengers. The extra frequency provides passengers with improved connectivity between the Highland capital and Schiphol airport, one of the world’s great aviation hubs.

Tickets are now on sale for the new schedule which will operate daily except Sundays and will be available from July 8 to August 28, to coincide with the busy summer season.

KLM introduced its Amsterdam Schiphol service in May, 2016 and since then has seen a high level of bookings from travellers. In summer 2017 the airline added a second flight in response to passenger demand. KLM offers Inverness passengers quick and convenient access to 165 destinations worldwide via its award winning hub at Amsterdam Schiphol Airport.

HIAL Managing Director Inglis Lyon, said: “We have been genuinely delighted at the success of the Inverness-Amsterdam flight and for KLM to now offer three flights a day is tremendous, given the connection was launched a little more than two years ago.  The extra flight will make a huge difference to passengers wishing to travel for business and pleasure. Travellers will have more options for onward connections.”

Inverness Airport General Manager Graeme Bell said: “The route has always been very popular with European travellers, in addition the long-haul market is hugely important and connecting through Amsterdam opens up these international destinations, allowing people to travel to and from Inverness on one ticket. This is very welcome news from KLM and a real vote of confidence in Inverness Airport.”

General Manager for Air France-KLM in the UK & Ireland, Benedicte Duval said: “As a result of the strong passenger numbers we have seen during the peak summer period, we are delighted to add a third daily flight for July and August 2019. The enhanced schedule will provide the local Highland community with more choice and even better connection times during what is the key holiday season. The additional flight adds 45% more seats when compared with the same period last year, making this beautiful region more accessible for international tourists.”